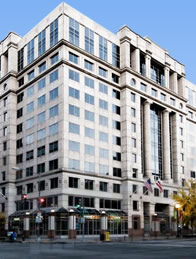 Franklin Tower is a 12-story office building located at 1401 I Street, N.W., in the East End of Washington, D.C.  Originally constructed in 1967, the building was the first headquarters for the U.S. Drug Enforcement Administration (DEA).  The building was redeveloped in 1991 after the DEA moved out. The redevelopment included a gutting of the building interior and a complete replacement of all systems and finishes, to position Franklin Tower as a Class A building.  The first three floors of the south and east elevations are faced with Indiana limestone, accented with rust colored granite.  The upper nine floors are finished in precast concrete, with punched windows, to continue the look and feel of the limestone below.  The fourth-floor features central balconies with classical fluted columns on both the south and east facades.  The north and west facades are brick with ribbon windows.   The lobby of the building is finished with elegant Italian marble flooring, walls and columns and the space is illuminated with cove and recessed can lighting.  An imposing marble lobby desk, backed by built-in marble planters, houses the building’s security and concierge services.  Building amenities include an on-site Concierge; a roof terrace, complete with benches and tables; a fitness center on the 2nd floor, which includes modern equipment in an attractive, well-lit area; Au Bon Pain on the first floor; and, a 3-level parking garage.

Franklin Tower is equipped with five (5) passenger elevators which serve the office building, one (1) freight elevator and one (1) elevator which serves the parking garage and roof deck.  The building is also equipped with an energy management system which controls heating, ventilation and air conditioning.  Safety features include smoke detectors, strobe lights, sprinklers, manual pull stations, fire pumps, emergency elevator controls and a public address system.  The Fire Control Panel, to which all components of the life safety system are tied, is monitored twenty-four (24) hours per day by Kastle Systems.  The building is also equipped with an emergency generator which provides power for emergency lighting, one (1) elevator cab, life safety systems, security systems and emergency communications.

Franklin Tower is located at the corner of 14th and I Streets across from Franklin Park, in Washington, D.C.  The property is surrounded by elegant hotels, prominent restaurants and world-class shops.  The location offers superior accessibility by both car and mass transit.  Vehicular access options to major thoroughfares include I-66, the George Washington Memorial Parkway, New York Avenue (Route 50 East) and the Rock Creek Parkway.  Public transportation is just steps away with the McPherson Metrorail station, which is right across the street, and the Metro Center Metro station, which is just five blocks away.